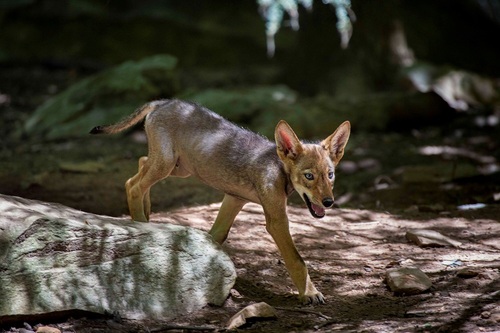 The public was invited to vote in an online poll from a list of names provided by the Zoo’s red wolf keepers. The names are based on rivers in the Southeastern U.S. where critically endangered red wolves used to range. The naming poll had over 6,500 responses.

The pups were born as part of the Zoo’s red wolf breeding program. There were three litters totaling 12 pups born during three days from April 28 to April 30 (the other two litters' pups’ names will be announced soon). This brings the number of red wolves currently in the Zoo's breeding program to 35, making it the second-largest pack in the U.S. after Point Defiance Zoo and Aquarium in Tacoma, Washington.

Only 15-20 red wolves remain in the wild, and they are all in eastern North Carolina. Red wolves are considered the most endangered canid in the world.

The N.C. Department of Natural and Cultural Resources (NCDNCR) is the state agency with a vision to be the leader in using the state’s natural and cultural resources to build the social, cultural, educational, and economic future of North Carolina. NCDNCR’s mission is to improve the quality of life in our state by creating opportunities to experience excellence in the arts, history, libraries, and nature in North Carolina by stimulating learning, inspiring creativity, preserving the state’s history, conserving the state’s natural heritage, encouraging recreation and cultural tourism, and promoting economic development.