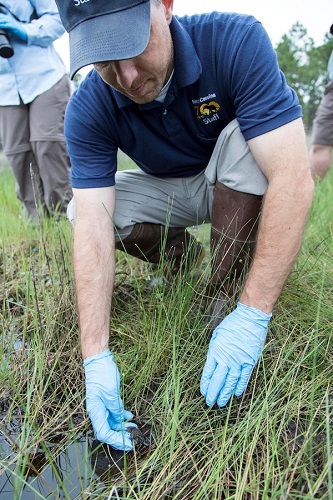 ASHEBORO, N.C. – The North Carolina Zoo just completed its fourth successful season of “head-starting” an army (or group) of one of North Carolina’s rarest amphibians, the Carolina gopher frogs in partnership with the North Carolina Wildlife Resource Commission (NCWRC).

“We recently released around 325 Carolina gopher froglets, which brings our total number of froglets released into the wild since 2016 to nearly 800,” said Curator of Herpetology Dustin Smith at the North Carolina Zoo.

The rare and secretive Carolina gopher frog resembles a toad and lives primarily in long-leaf pine savannas of the Sandhills area of North Carolina. The frogs have now been listed as endangered by the NCWRC, as populations have dwindled from 30 habitats to only six in the state.

The North Carolina Zoo has been “head-starting” the frogs to grow their populations in the wild. Zoo staff has been collecting Carolina gopher frog eggs from the wild to the “tadpole nursery” at the North Carolina Zoo, where they are given a “head start,” safe from predators, habitat degradation, and environmental factors. After a few months, the tadpoles become froglets and are returned to the ponds where they were found.

We have had many successes and failures in the four years that we have been head-starting Carolina gopher frogs – namely combatting non-native fire ants,” said the Zoo’s Animal Management Supervisor  Chris Shupp, who has led the Zoo’s efforts in the program.

Some of the frogs released to the wild are wearing transmitters and are being closely monitored to learn more about their movements and habitat needs. The radio-tracking has provided valuable information about the Carolina gopher frog movements and refuge sites, as well as additional threats and more.

Frogs can be an important indicator species, serving as a measure of environmental conditions, because they live in two environments – both land and water. And frogs have thin skin and can absorb toxic chemicals, radiation, bad bacteria, and diseases. Frogs also play an important role in the food chain as they are both predator and prey. When frogs disappear from an environment, then many other animals and insects are impacted. If an area has strong amphibian diversity, then it means there is a healthy ecosystem.

The public can view rare Carolina gopher frogs in the Sandhills section of the Zoo’s Cypress Swamp habitat.

Your visit to the North Carolina Zoo helps save the Carolina gopher frogs and supports other frog conservation programs in the wild.