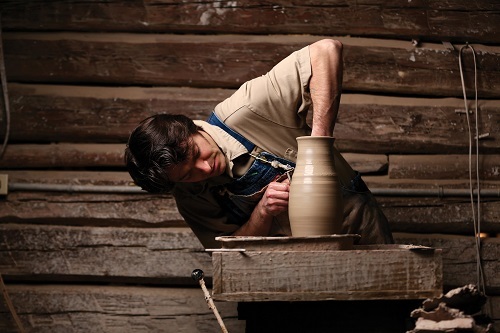 Travis Owens behind the wheel - photograph by TOWN Carolina

You’ll know you’ve arrived in pottery central when you spy the clay pieces mounted on the brick columns flanking the “Welcome to Seagrove” sign. Strewn along Highway 705 and the dusty roads that branch off of it, more than 100 potters work within a 20-mile radius of Seagrove.

Although the pottery tradition in central North Carolina reaches back some 250 years to the first Native Americans, and later to the European farmers who were drawn by the area’s natural supply of heavy clay soil, it was the establishment of Jugtown Pottery in 1921 that put Seagrove on the map.

Jugtown’s founders, Jacques and Juliana Busbee, were Raleigh artists who first visited the town in search of orange-glazed pottery similar to a “dirt dish” that had caught Juliana’s eye at a pie competition she was judging in Lexington, North Carolina, in 1915. The couple discovered stoneware aplenty here but also found a waning pottery industry that had been hamstrung by Prohibition.