Chimpanzee Ruthie Passes Away at 47 at the North Carolina Zoo 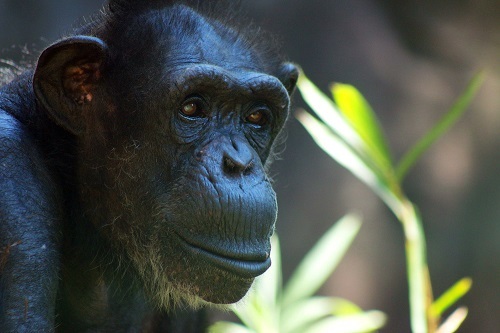 Asheboro, NC – Ruthie, a chimpanzee who has lived at the North Carolina Zoo for nearly 40 years and was known for being silly, sassy and stubborn, was humanely euthanized on Thursday afternoon.

Ruthie was diagnosed with heart disease seven years ago that was being managed successfully with medication.  In October 2017, Ruthie advanced to congestive heart failure which was monitored closely and managed with adjustments to her treatment regime after consultation with both veterinary and human cardiologists working with the Great Ape Heart Project. Last week, she experienced a rapid worsening of her heart disease. As her health continued to decline, the Zoo’s veterinary and animal care staff made the difficult decision to humanely euthanize her.

She lived a full life for her species: female chimpanzees live for approximately 40 years. After the procedure, her body was presented to the chimpanzee troop so they could observe the death and mourn the loss.

“Similar to humans, cardiovascular disease is very common in chimpanzees and is the leading cause of death in older great apes in human care,” said the Zoo’s Director of Animal Health Dr. Jb Minter.  “We have been monitoring and treating Ruthie’s progressive heart disease for the past seven years, and I could not be prouder of the veterinary and animal care teams for their dedication to providing Ruthie with the exceptional care and attention needed as her disease progressed.”

Ruthie was also known as an excellent surrogate mother or ”auntie” who embraced and cared for offspring that were not her own.

Jennifer Ireland, the Zoo’s curator of mammals, has worked with Ruthie for more than 20 years.

"Ruthie was silly, sassy and the most stubborn animal – including human – I’ve ever known,” Ireland said. “She was a great auntie to all the younger chimps we’ve had in our troop – in fact, she is the first chimp we introduced infants and youngsters to – and she remained a favorite companion as they grew up.”

Ireland added, “She was always happy to see me, greeting me with a head bob and an open mouth, typical ways chimps greet other chimps. All of us will miss her tremendously.”

“All of our animals are special to us,” said Zoo Director Pat Simmons. “Because of her long life at the Zoo, generations of guests will remember Ruthie and, most importantly, will see her as a symbol of how important it is to save this species in the wild.”

Chimps are well-known for their intelligence, tool-use, complex social structures and communication through vocalizations, gestures, body postures and facial expressions that convey emotions such as happiness, anger, depression, and fear.

Chimps are one of the five types of great apes along with gorillas, orangutans, bonobos and humans. They are considered endangered in the wild because of habitat destruction of the forests of central Africa.  As a result, their populations have steadily declined over the years. Although numbers are difficult to estimate, the International Union for Conservation of Nature (IUCN) believes there are 172,000 – 299,000 left in the wild.

The North Carolina Zoo is part of the Association of Zoos and Aquariums Chimpanzee Species Survival Plan which helps monitor and guide chimp populations in zoos and also supports the health and well-being of chimps in the wild. Ruthie’s heart will be donated to the Great Ape Project, an international non-profit, to further study and aid understanding of heart disease in aging chimps.