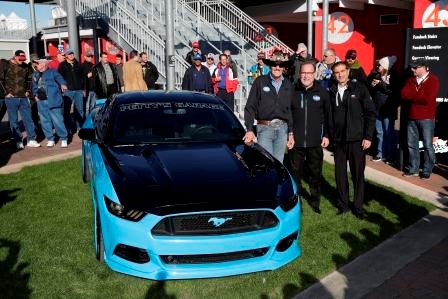 Two versions of the Petty's Garage Mustang GT will be built this year; the Stage 1 version will be limited to 100 units, while the even more exclusive Stage 2 version will total 43 units.

Stage 1 Petty's Garage Mustang GT will feature a host of custom modifications - both visual tweaks and under the hood. A Petty's Garage fascia at the front imparts a unique look, while a reworked rear fascia features a center-exit exhaust and prominently showcased race-inspired spoiler. Inside, custom embroidered head restraints, floor mats and Richard Petty's own signature on the dashboard set this Mustang GT apart from the rest.

Stage 1 Mustang GT can be ordered in any color, with all unique bodywork painted to match in- house at Petty's Garage.

Of the 43 Petty's Garage Stage 2 Mustang GTs planned, only 42 remain, as rock 'n' roll legend Brian Johnson has an order in for the first car.

"This Mustang has just taken my breathaway," said Johnson, lead singer for AC/DC. "It really is one of the best cars I've ever driven.  I didn't have an American car, but I do now!"

Paint fit for 'The King'

The Petty's Garage Stage 2 Mustang GT's custom two-tone paint job is identical to the 2014 SEMA show car. Using crushed-and-tumbled glass combined with iconic Petty Blue paint, Petty's Garage has created a one-of-a-kind color for the lower half of the car. A custom tri-coat pearl escent blend of Ford Tuxedo Black complements Petty Blue for the upper half. "The King's" legendary No. 43 is expertly ghosted into the paint on the fastback Mustang GT's hood and C- pillar.

The Petty's Garage Stage 1 car carries an MSRP of $62,210, while the Stage 2 car comes in at $92,210. Orders for this limited-edition Mustang GT can be placed at any Ford dealership on a first-come, first-served basis.

Ford Motor Company,a global automotive industry leader based in Dearborn,Michigan,manufactures or distributes automobiles across six continents. With about 187,000 employees and 62 plants worldwide,the company's automotive brands include Ford and Lincoln. The company provides financial services through Ford Motor Credit Company. For more information regarding Ford and its products worldwide,please visit www.corporate.ford.com.