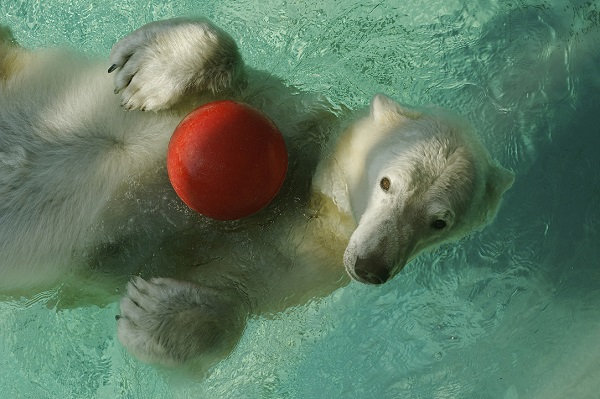 A necropsy, which is an animal autopsy, revealed that Patches had an extensive lung mass suggestive of lung cancer. In recent weeks she had become lethargic and uninterested in food, according to Ken Reininger, the zoo’s general curator, and Dr. Jb Minter, the zoo’s senior veterinarian. She passed away just weeks shy of her 27th birthday.

“In the wild the average life span of a polar bear is 15-to-18 years old,” said Dr. David Jones, director of the zoo. “Patches was 26 years old. She exceeded wildlife expectations by living a long life. She will be greatly missed by the zoo’s staff and visitors.”

Always one of the zoo’s most recognizable animals, Patches recently had gained a “roommate” in Anana, a 15-year-old polar bear who arrived last month from the Lincoln Park Zoo in Chicago. Anana, who has been on exhibit, will spend the next few days being introduced by zoo keepers to a new area within the recently expanded polar bear exhibit. Once she’s comfortable in her new surroundings, the exhibit will be re-opened to visitors.

Patches was born at the Henry Doorly Zoo in Omaha, Neb. She was moved to the Erie (Pa.) Zoo in December 2007. When the Erie Zoo started a major construction project in November 2013, Patches was moved to the North Carolina Zoo, where she quickly became an iconic animal.

“Patches will be sorely missed,” said John Skvarla, secretary of the Department of Environment and Natural Resources, which manages the zoo. “She was a special animal that shared her beauty and personality with thousands of North Carolina school children and residents. We are sorry to lose her, but grateful for her time with us.”