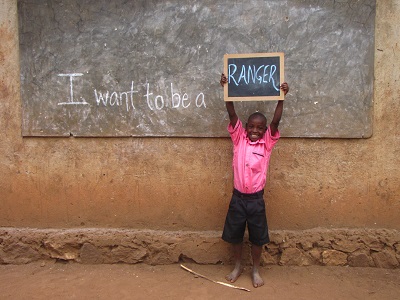 A student in Uganda who participated in the zoo's UNITE for the Environment Program.

Uganda has one of the world’s fastest growing human populations, placing pressure on wildlife and its habitat due to firewood collection and poaching.

The zoo’s UNITE for the Environment Program has been working to save the wildlife of Uganda’s Kibale National Park for more than 10 years. Kibale National Park is one of Africa’s most important rainforests. It is home to a variety of endangered species, including: African golden cats, elephants and the largest chimpanzee population in all of East Africa. UNITE’s mission is to conserve wild areas in and around Kibale National Park by inspiring the next generation of Ugandan conservationists and fostering an appreciation of nature and wildlife in rural communities. UNITE works in rural schools to help teachers include conservation and environmental information in their lessons so it is relevant for their students.

With the grant from Disney, the zoo’s UNITE project will train teachers how to teach young Ugandans about chimpanzees and how to conserve them. The grant will also give UNITE the opportunity to bring teachers and students into the forest to visit families of wild chimpanzees. People living in rural Uganda often have negative perceptions of chimpanzees and chimpanzee tracking is seen as an activity only for foreign tourists. Bringing students and teachers to visit the chimpanzees and have close, positive interactions with them will help them to develop an appreciation of these unique animals that they would not otherwise have. Ultimately, the goal of the Disney funded project is to inspire and empower Ugandans to become agents of change and advocate on a daily basis.

“Support from the Disney Worldwide Conservation Fund will not only allow us to expand our activities in Uganda to better conserve chimpanzees, but is also recognition of the success of our long running UNITE project,” said Dr. Richard Bergl, the zoo’s Curator of Conservation and Research.

The Disney Worldwide Conservation Fund focuses on protecting wildlife and connecting kids and families with nature. Since its founding in 1995, DWCF has provided more than $25 million to support conservation programs in 114 countries. Projects were selected to receive awards based upon their efforts to study wildlife, protect habitats and develop community conservation and education programs in critical ecosystems.