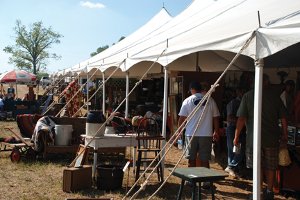 In 2001, Liberty was honored to become one of the few towns on the North Carolina National Historic Register for its rich history and historic architecture. In 2009 the town celebrated its Bicentennial. In Downtown Liberty, the Liberty Train Depot built some time before 1905, is an excellent example of a turn-of-the-century train station and the most elaborate example in Randolph County.

Liberty is home to the Liberty Antiques Festival, voted the best antiques show in the Mid-Atlantic Region that has drawn such famous personalities as Hollywood celebrities, Julia Roberts and Bruce Willis.

Liberty is also home to the 1802 Sandy Creek Primitive Baptist Church, the oldest organized church and oldest surviving religious structure in Randolph County. Founded in 1755 by Elder Shubal Stearns, it is considered the most significant landmark in Baptist history as noted by the nearby state historic marker designating it the "Mother of Southern Baptist Churches". For additional information on the history and heritage of the Sandy Creek Primitive Baptist Church, please contact the Randolph County Historic Landmark Preservation Commission.

The area is served by six Asheboro area hotels.