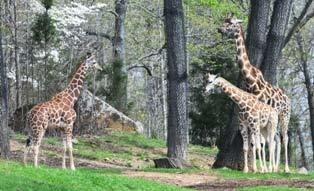 ASHEBORO, N.C.-The North Carolina Zoo is launching a contest to select names for two giraffes that arrived recently at the zoo and are now on exhibit in the park's Forest Edge exhibit. For the contest, the zoo is partnering with ClearChannel Radio Greensboro stations and Triad television station WGHP-TV FOX 8.

The contest, "Name the Giraffes," is open to all ages. Entries should reflect creativity, originality and the zoo's mission of animal welfare and conservation.

The new giraffes, both 11 months old, arrived in March--the male from Dickerson Park Zoo in Missouri and the female from Cheyenne Mountain Zoo in Wyoming.

Contest entries may be submitted manually by completing a form at ballot boxes at the park's two entrances or electronically by using the online form at the zoo's Web site, www.nczoo.org . Entries may also be mailed to: Name the Giraffes Contest, N.C. Zoo, 4401 Zoo Parkway, Asheboro, NC 27205.

The submission deadline is Sunday, May 10. The names will be chosen by zoo keepers and staff, and the winner will be announced on May 13 on the zoo's Web site, ClearChannel Radio Greensboro stations and WGHP FOX-8.

The winner will have the first opportunity to feed the giraffes at the Acacia Station giraffe feeding-deck dedication ceremony in May and will receive a one-year N.C. Zoo Society family membership and a zoo gift basket. Additionally, a plaque with the winner's name and the winning giraffe names will be placed at the exhibit.

The zoo is an agency of the N.C. Department of Environment and Natural Resources, Dee A. Freeman, Secretary; Beverly E. Perdue, Governor.