North Carolina Zoo Loses Rhino Olivia, One of Its Most Elderly Residents 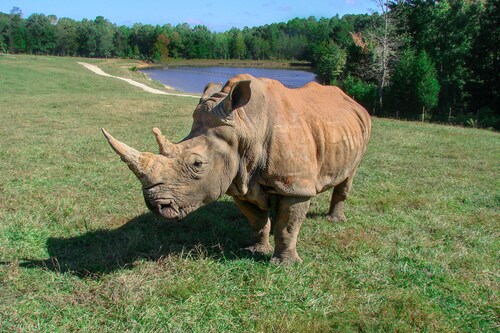 ASHEBORO, NC –  Olivia, a southern white rhinoceros who has lived at the North Carolina Zoo for more than 30 years, passed away on September 15.

Olivia, 54, had lived at the North Carolina Zoo since 1987 and arrived as a breeding pair with male rhino Stan, although no offspring were born.

In later years, Olivia and Stan lived together at the Zoo’s spacious rhino annex (off view from the public) in retirement for several years until Stan died in 2019.

Since then, Olivia was reintroduced to the other animals on the Zoo’s 40-acre Watani Grasslands and took on the role of “Great Auntie” to the younger rhinos. Southern white rhinos are the most social of the rhino species and live together in groupings called “crashes.”

“Due to her significantly advanced age, we have been closely monitoring Olivia for any signs of declining health for the past few years,” said Dr. Jb Minter, the Zoo’s director of Animal Health and Chief Veterinarian. “The culmination of several health conditions led to a significant decrease in her quality of life and her ability to get around comfortably.  The animal care and veterinary teams then made the difficult decision to euthanize Oliva.”

"I will certainly miss Liv and her sassy attitude," said Zookeeper Anna Hinson, who cared for the rhino for several years. "Over the years, she mellowed quite a bit, and I wish the Zoo‘s newer keepers had been around to see ol’ Liv in her prime. Even in her golden years, it‘s truly remarkable how she stuck to her routine. I‘ll forever be richer for having worked with her."

In addition to their work with the rhinos at the North Carolina Zoo, staff work on conservation projects in several countries in Southern Africa to save this species. Through SMART (Spatial Monitoring and Reporting Tool), the North Carolina Zoo is working to protect rhinos and other species in the wild. SMART is an app that allows national parks and other protected areas to better understand patterns of wildlife distribution and illegal activity and combat destructive activities like poaching.

The second-largest land mammal after elephants, southern white rhinos have two horns, grow to 12-13 feet long and up to six feet from hoof to shoulder, and weigh 4,000 to 5,000 pounds at full maturity. Olivia weighed approximately 3,200 pounds.

Donations in remembrance of Olivia and for rhino conservation around the world can be made by visiting online at N.C. Zoo Society Anti-Poaching Programs.

At the North Carolina Zoo, we celebrate nature. As the world’s largest natural habitat Zoo, we inspire a lifelong curiosity about animals for the hundreds of thousands of people who visit our Zoo each year. Our dedicated team of experts provides exceptional, compassionate care for the more than 1,700 animals and 52,000 plants that call our Park home. We also lead efforts locally and globally to protect wildlife and wild places because we believe nature’s diversity is critical for our collective future. The North Carolina Zoo invites all of our guests to witness the majesty of the wild in the heart of North Carolina and welcomes everyone to join in our mission to protect nature’s diversity. Visit NCZoo.org to begin your life-changing journey.