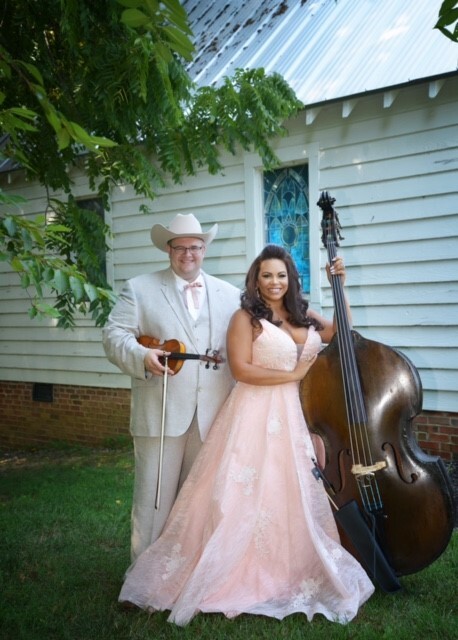 Asheboro, NC - The intense, authentic high lonesome bluegrass sounds of Dewey and Leslie Brown will ring from the stage in the second 2021-22 Sunset Series event.

The performance will take place at 7 p.m. Saturday, October 16 at the historic Sunset Theatre in downtown Asheboro. It’s free and the public is invited. The event also will be live-streamed on the Sunset Theatre’s Facebook page.

The Sunset Series is sponsored by the Heart of North Carolina Visitors Bureau, the City of Asheboro, and the Friends of the Library. It is respectfully requested that audience members wear face coverings during the performance.

Backing the “bluegrass power couple” will be their band, the Carolina Gentlemen.

Dewey and Leslie perform original tunes such as “Dana,” “Ultimate Sacrifice” and “Bury Me on the Mountain” that climb the bluegrass and gospel charts. The couple also owns and operates the Liberty Showcase Theater in Liberty, N.C.

Dewey started playing the fiddle at age nine and began his professional career in high school with the band Blue Ridge. At age 17, he won first place at the Old Time Fiddlers Convention in Galax, Virginia.

Dewey has recorded on Grammy-nominated albums with artists such as Josh Turner, Dierks Bentley, and Lee Ann Womack. He has appeared at the Grand Ole Opry and played for the Queen of England.

Leslie is an authentic coal miner’s daughter, raised by her grandparents in the Appalachian Mountains of Vansant, Virginia, where her grandfather played in a family band. Her mountain upbringing has played a major role in her songwriting (she writes most of the couple’s songs), dancing and singing. She began clogging at local bluegrass festivals at age seven, becoming a well-known clogger in the bluegrass world.

In addition to their Liberty Showcase Theater duties, Dewey and Leslie, who have been married since 2007, run two annual festivals, “Deweyfest” and “Gospelfest,” held on their 52-acre farm in Burlington.

For further information, call the Heart of North Carolina Visitors Bureau at 800-626-2672.