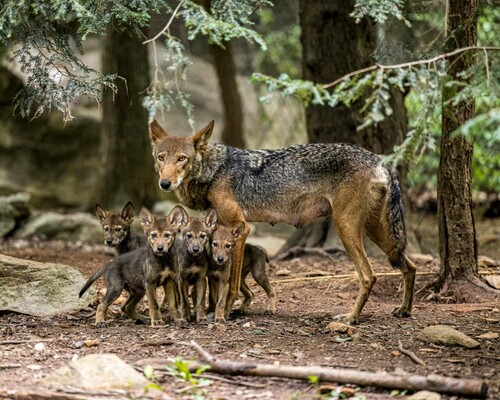 Asheboro, NC – The North Carolina Zoo is asking the public to vote for names for six American red wolf pups born in April.

For the first time in two decades, this red wolf litter was born in the wolves’ public habitat, giving Zoo guests a rare chance to view the pups for a limited time. Most litters are born in the red wolf breeding area, which is an area of the Zoo closed to the public. The parents of this litter (four females, two males) are Flint (male) and Sassy.

Members of the public can cast their vote for their favorite name among the six chosen by the Zoo's red wolf keepers. The names are based on rivers in the Southeastern U.S. where critically endangered red wolves used to range.

Voting opens at 10 a.m. on Friday, June 18, and closes Monday, June 28 at 4 p.m. (all EDT). The public can access the online poll through the Zoo's website at nczoo.org or through the Zoo's social media channels on Facebook, Twitter, and Instagram. There is no charge to select names. The winning names will be announced on Wednesday, June 30.

The pups were born as part of the Zoo’s red wolf breeding program. There were three litters totaling 12 pups born during three days from April 28 to April 30 (the other two litters' pups’ names will be announced soon).  This brings the number of red wolves currently in the Zoo's breeding program to 35, making it the second-largest pack in the U.S. after Point Defiance Zoo and Aquarium in Tacoma, Washington.

Only 15-20 red wolves remain in the wild, and they're all in eastern North Carolina. Red wolves are considered the most endangered canid in the world.