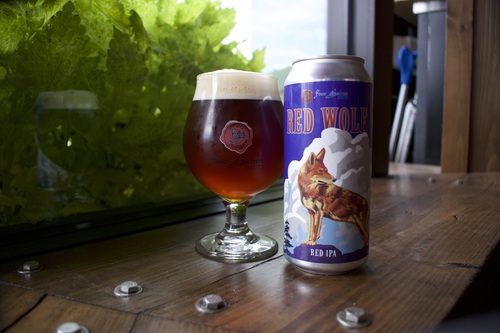 “Some of the projects going on at the Zoo are making an impact all over the world,” says Joel McClosky, Four Saints co-owner and CEO. “When people see what’s happening at the Zoo, we hope it will have a domino effect, that learning about the Zoo will encourage them to come to check out our community and all of the great things going on.”

The North Carolina Zoo is located seven miles south of Four Saints Brewing. It is the largest natural habitat zoo in the world and plays a major role in animal conservation in the United States and internationally. The American red wolf was once the apex predator in the southeastern U.S. but was declared extinct in the wild 40 years ago. A recovery program reintroduced the American red wolf to the Alligator River National Wildlife Refuge in eastern North Carolina. Today the entire American red wolf population consists of about 250 wolves under human care and about 15 wolves in the wild.

“The North Carolina Zoo Society is pleased to partner with Four Saints to help save the American red wolf from extinction,” says Cheryl Armstrong, executive director of the society, the private nonprofit that supports the Zoo. “Housing the second-largest pack of breeding red wolves in the world, the North Carolina Zoo plays an important role in the survival of this critically endangered species.”

Red Wolf Red IPA is a medium-bodied hoppy beer with a complex yet clean taste profile. It will be available in the Four Saints taproom, and 34 Lowes Foods stores, and other independent craft beer retailers in the Triad, Triangle, and Charlotte.

“This project brings together so many local partners — from the Zoo Society and Lowes Foods to the malt for the beer, the can design, labels, cans, canning process — all of that is something that matters a lot, maybe now more than ever,” McClosky says.