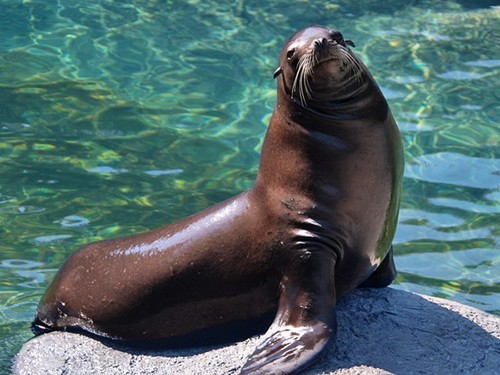 Diesel, a California sea lion, was a favorite of guests and keepers because of his charismatic personality. Photo credit: North Carolina Zoo

Asheboro, N.C. - Diesel, a California sea lion, who one zookeeper remembered as a "chatty goofball full of energy," passed away on Aug. 18. Diesel arrived at the Zoo in 2015 with another sea lion pup named Owen after both were deemed unfit to be returned to the wild.

The veterinary team anesthetized Diesel after observing he experienced eye pain and intermittent episodes of loss of appetite. Though successfully anesthetized for exams in the past, Diesel developed an abnormal breathing pattern during recovery from this anesthesia procedure and went into cardiopulmonary arrest. Despite resuscitation efforts, including CPR, Diesel passed away. Necropsy (animal autopsy) and a full pathology report will provide more information about his cause of death in the coming weeks.

As a young pup, Diesel was found stranded on the beach in California and brought to a marine mammal rehabilitation center for care. Once stable, he was released back into the wild. He stranded again shortly after release, prompting marine mammal rehabilitation experts to deem him unable to survive in the wild. He was then brought directly to the North Carolina Zoo in July 2015.

California sea lions are known for their intelligence and playfulness and are very social animals. Diesel was a favorite of guests and keepers because of his charismatic personality. California sea lions live along the western North America coastline from Alaska to Mexico.

Sally Adams, one of his zookeepers, described him this way: "Diesel had a big sparkling personality. He epitomized what a California sea lion is. He was a chatty goofball full of energy, always eager to learn new things and show off anything new.”