Three Orphaned Otters Receiving Care at North Carolina Zoo Before Being Released Back in the Wild. M 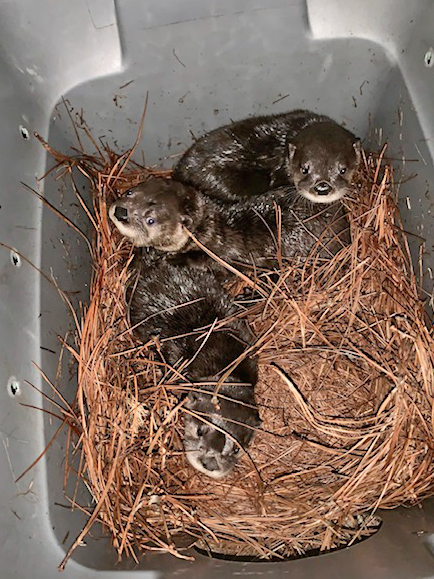 ASHEBORO, NC – Three recently orphaned North American river otter pups have joined together as a group at the North Carolina Zoo to prepare for their eventual release back in the wild.

The North Carolina Zoo’s Valerie H. Schindler Wildlife Rehabilitation Center is caring for the pups, estimated to be 12 to 18 weeks old. They will eventually be released back into the wild as a group.

All three otters are ideal candidates for rehabilitation and release as they were recently rescued without excessive human contact.

Dr. Jb Minter, the Zoo’s Director of Animal Health, said they were in good physical condition with no apparent signs of injury or illness.

“We are caring for them as hands-off as possible because we want to preserve their natural behaviors to ensure they have a better chance of surviving in the wild,” Dr. Minter said.

Releasing them as a group can also boost their chance of success, said Halley Buckanoff, the Wildlife Center’s veterinarian technician.

“Creating these foster families allows them to socialize with their species, and the younger ones often learn from their older ‘siblings,’” Buckanoff said. “Right now, they’re sleeping together, eating alongside each other with no signs of competition, and swimming together. They’re doing great as a group.”

How the otters were found

The first otter was rescued in a parking lot in Raeford in Hoke County on May 2 by A Wild Life: Center for Wildlife Rescue, Rehabilitation and Release. The female otter is estimated to be 14 to 16 weeks old. She arrived at the Zoo on May 12.

The second and third otters, both males, were rescued by Outer Banks Wildlife Shelter (OWLS) in Newport in Carteret County. Both otters arrived on May 13 at the Zoo.

The second otter, around six weeks old, was found in the Peletier area on April 25 in the roadway after heavy rain.

The third otter, about eight weeks old, was found April 27 near the Cedar Island Bridge. The body of its mother, who had been hit by a car, was found nearby.

Dr. Emily Christiansen, the Chief Veterinarian for the three North Carolina Aquariums, arranged for all three to be taken to the Zoo.

Transitioning for release into the wild

At the rehabilitation center, the otters will transition from formula to solid food and catching fish on their own during the next several months. Their final stages of care will be in a safe, outdoor, aquatic enclosure where they can prepare for their return to the wild.

Once ready, the Zoo will coordinate the otters' release with the North Carolina Wildlife Resources Commission (NCWRC). Their release back into the wild is expected to occur in late summer or early fall.

May 27 is recognized as World Otter Day.

North American river otters had almost disappeared by the early 20th century because of unregulated trapping, water pollution and wetlands destruction. In the 1990s, the NCWRC began a restoration effort in the mountains with 267 river otters relocated from coastal North Carolina. Thanks to this program, the otter population is now considered fully restored and abundant throughout North Carolina.

Curious, playful and excellent swimmers, otters are on average, 3 to 4 feet long, and weigh between 12 to 23 pounds. These nocturnal, semiaquatic opportunistic predators are important to the ecosystem because they reduce undesirable fish populations that compete for food with cold-water game fish.

Easily adaptable to living in warm, coastal marshes to cold mountain streams, they are active in the wild year-round.