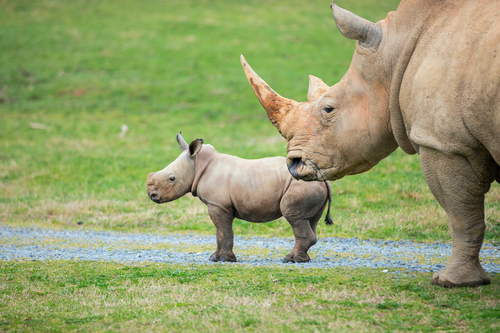 Asheboro, NC – The North Carolina Zoo and First Lady of North Carolina Kristin Cooper are excited to announce the name of the second female southern white rhino born at the Zoo this year, on Monday, Feb. 24.  She was born to mom Linda and dad Stormy.

Mrs. Cooper announced in a video that “Jojo” is the winning name chosen by the public. The public was invited to vote in an online poll from a list of names provided by the Zoo’s rhino keepers.

“Jojo” (pronounced joe-joe) is named after rhino keeper Joseph “Jojo” Wachira of the Ol Pejeta Conservancy in Kenya. Wachira was one of the last caretakers of Sudan, the last male northern white rhino, featured in the documentary film “Kifaru.” *Phonetic pronunciations at the end

Wachira’s connection to North Carolina began when he visited the RiverRun International Film Festival in 2019 with North Carolina-based director Andrew Brown for the showing of “Kifaru” in Winston-Salem.

When notified of the name choice, Wachira was “deeply honored to hear the news – this is what I believe in and fight for every day – saving rhinos.”

At the beginning of the 20th century, southern white rhinos were hunted to near extinction for their horns, which some erroneously believe provide medicinal benefits. Rhino horn is constructed from keratin, which is the same material that makes up human fingernails and hair.  There are currently around 20,000 southern white rhinos left in the wild, mostly in the southern Africa region.