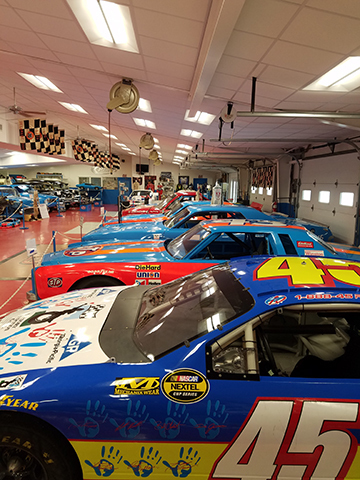 Cars in display at Petty's Garage in Level Cross, NC.

They call him “The King.” His crown is his trademark Charlie 1 Horse wool cowboy hat. And with his genuine and approachable demeanor, he holds court wherever he goes. While you might not see him while at the Petty Museum, his life is on full display.

As the most decorated driver in NASCAR history with 200 race wins that spanned three decades, Richard Petty is kind of a big deal. As the son of three-time NASCAR Grand National champion driver Lee Petty, the likelihood he would follow in his father’s footsteps was strong. He began his professional racing career in 1958 and quickly won his first professional race in 1959 at Columbia Speedway. He earned the NASCAR Grand National Rookie of the Year that same year.

While his legacy in the world of racing is undeniable, his impact on his community will ripple for generations. Petty has traveled the globe throughout his illustrious career, but his roots in his hometown of Level Cross, N.C., run deep.