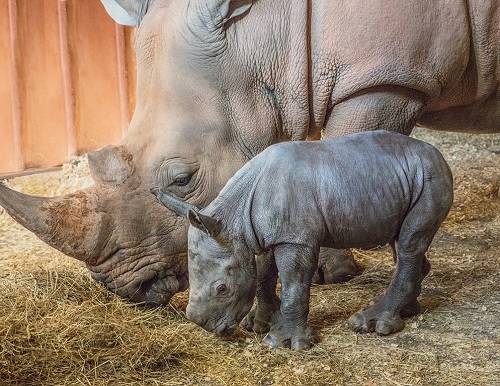 Asheboro, NC – The North Carolina Zoo is excited to announce the birth of a third southern white rhino in just under two years. The female calf was born on Sunday, Jan 5,  to mother Kit and father Stormy. The calf weighed approximately 100 pounds and will be named at a later time.

This birth marks another significant achievement for the zookeepers and the veterinarian team who work with the Zoo’s rhino herd every day.

“This is a great moment and testament to the dedication of our Zoo staff,” Zoo Director Pat Simmons said. “These successful births are because of a lot of hard work and collaboration among our entire animal care staff.”

“Grassland keepers are thrilled at yet another addition to our herd!” Tuttle said. “It’s a great gift to usher in the New Year and the new decade here at the North Carolina Zoo!"

Zookeepers report the new calf is healthy and nursing. They expect her to gain 100 pounds a month in the first year. She could weigh 3,500 to 5,500 pounds when fully grown.

“Congratulations to the North Carolina Zoo on the successful birth of a third Southern white rhino in just two years,” said Susi H. Hamilton, secretary of N.C. Dept. of Natural and Cultural Resources. “I’m proud of the Zoo’s continuing commitment to saving this and other threatened species at home and around the world.”

About N.C. Department of Natural and Cultural Resources

N.C. Department of Natural and Cultural Resources (NCDNCR) is the state agency with a vision to be the leader in using the state’s natural and cultural resources to build the social, cultural, educational and economic future of North Carolina. NCDNCR’s mission is to improve the quality of life in our state by creating opportunities to experience excellence in the arts, history, libraries, and nature in North Carolina by stimulating learning, inspiring creativity, preserving the state’s history, conserving the state’s natural heritage, encouraging recreation and cultural tourism, and promoting economic development.