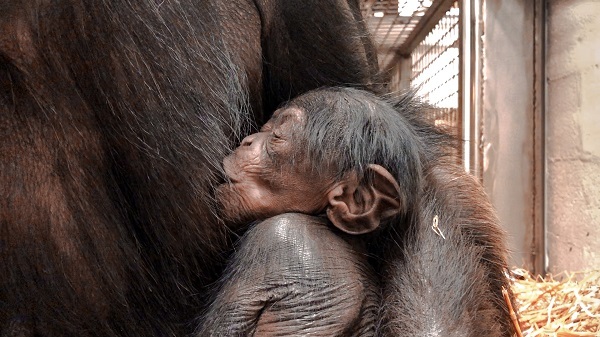 Asheboro, N.C. Nov. 14, 2019 – The North Carolina Zoo announces a new addition to the chimpanzee troop! Tuesday, Nov. 12, a healthy baby girl was born to chimp Amy. Both mother and baby are doing well, and the baby started nursing quickly.

This is the fifth chimp birth in the last nine years at the North Carolina Zoo. The Zoo is currently the most successful Association of Zoos and Aquariums (AZA) zoo for breeding chimps.

Amy, who is 35 years old, is an experienced mother and very protective of her young. Amy was born at the North Carolina Zoo in 1983 and is the mother of Gus, who was born in 2014.

According to zookeepers, the troop is being respectfully curious about the new infant, including big brother Gus. The adult male chimpanzees in this troop are known for being gentle and playful with younger chimps.

The Chimpanzee Species Survival Plan (SSP), managed by the AZA, recommended this planned birth. The Zoo’s Curator of Mammals, Jennifer Ireland, is the Vice Program Leader of the Chimpanzee SSP. The Zoo’s chimpanzee troop is one of the largest troops in AZA-accredited zoos in the United States.

"Having two baby chimps born close together is such an exciting time,” Zoo Director Pat Simmons said. “Our guests will be able to watch them grow and play together and understand why it’s important to save chimpanzees in the wild. We are always thrilled with births at the Zoo because it’s a win for conservation.”

Chimps are one of the five types of great apes along with gorillas, orangutans, bonobos and humans. They are well-known for their intelligence, tool-use, complex social structures and communication through vocalizations, gestures and body posture and facial expressions that convey emotions such as happiness, anger, depression and fear.

Chimps are endangered in the wild because of habitat destruction of the forests of central Africa, and populations have steadily declined over the years. Although numbers are difficult to estimate, the International Union for Conservation of Nature (IUCN) believes there are 172,000 – 299,000 left in the wild.

The gestation period for chimpanzees is 230 days. Chimps have an average life span of 35-40 years under human care.

The Zoo has recently mourned the loss of two of its older chimps – Ruthie, who died in 2018 at the age of 47 and alpha chimp Maggie, 45, who died earlier this year in April.