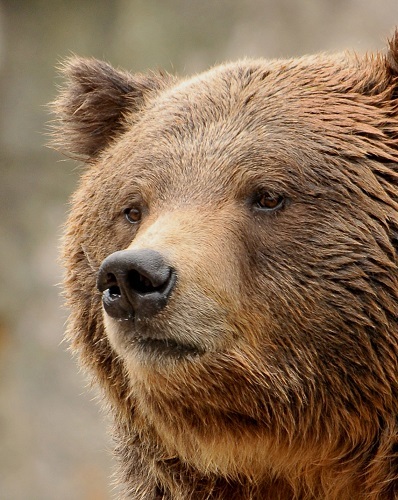 ASHEBORO, NC – Yepani, a grizzly bear who has lived at the North Carolina Zoo for 25 years and was known for his gentle and patient personality, died Wednesday, Sept. 18.

Yepani arrived at the Zoo in November 1994 from the Woodland Park Zoo in Oregon. He originally was a “nuisance bear” from Yellowstone National Park. Another bear from Yellowstone named Tommo also came to live at the Zoo because of similar circumstances a few months later.

Nuisance bears have lost their fear of humans because they start to associate people as suppliers of food. This happens when people don’t properly secure their food while out in the bear territories in the wilderness (camping, RVing, hiking). As a result, bears start to pose a threat to human safety in outdoor recreation areas.

Yepani started stealing coolers and backpacks from campsites in Yellowstone to get food. With a keen sense of smell, bears will damage property in search of food or become aggressive toward people.

Unfortunately, bears like Yepani usually end up being euthanized because of this human-bear conflict. In Yepani's case, the Zoo was able to provide a good home to allow him to live a long and healthy life.  To learn how to curb creating nuisance bears, please visit www.bearwise.org

Male grizzlies in the wild live about 10-11 years and can weigh 400-700 pounds (Yepani weighed 400 pounds). They can also reach speeds of 30 mph for short distances. The fact that Yepani lived for an estimated 28 years is a testament to the great care he received through the years.

Alexis Rowe, one of his zookeepers, has fond memories of him. “Yepani was smaller than Tommo but was definitely mightier. Because of his smaller size, the staff gave him nicknames including ‘Little Bear,’ ‘Teacup Bear’ and ‘Rollie Pollie.’ He loved to roll in fresh mulch and other natural materials laid out in his habitat.”

He was the first grizzly bear to call the North Carolina Zoo home. The name Yepani means “Autumn” in the Native American Shoshone dialect because of the time of year he arrived at the Zoo.

“Yepani started experiencing clinical symptoms of intervertebral disk disease (IVDD) late last week,” said Director of Animal Health Dr. Jb Minter.  “Intervertebral disk disease, often referred to as a herniated, slipped or ruptured disk is commonly seen in some of our domestic pets. The rapid progression of this disease severely diminished his quality of life, and the difficult decision to humanely euthanize Yepani was made Wednesday morning.  A necropsy (animal autopsy) was performed this afternoon confirming the suspicion of IVDD.“

“Millions of Zoo guests over the years were able to connect with Yepani,” said Animal Management Supervisor Chris Lasher, who started working at the Zoo the same year Yepani came. “He participated in his own care and was usually the first to learn new tasks the keepers asked of him. Over the years he allowed keepers to brush his teeth, listen to his heart, give him vaccines and take his blood because of the strong relationships with his keepers.”

Once prevalent throughout western North America, there are currently about 55,000 wild grizzly bears in North America, most of which live in Alaska. Approximately 1,500 Grizzlies inhabit the lower 48 states of the U.S.

The Zoo’s other grizzly bear Tommo is estimated to be 29 years old and weighs around 650 pounds. Zoo guests can continue to see him on habitat at the Zoo. Tommo means “Winter” in Native American Paiute for the season he arrived.

“Grizzly bears are such an iconic North American species,” said Pat Simmons, director of the Zoo. “Yepani was a wonderful, and important, ambassador for the plight of bears in the wild and will not be forgotten.”

Lasher continued, “I count myself privileged to have been part of his life, and I of his, for the last 25 years.”