Shopping with The Vintage Traveler at the Liberty Antiques Festival 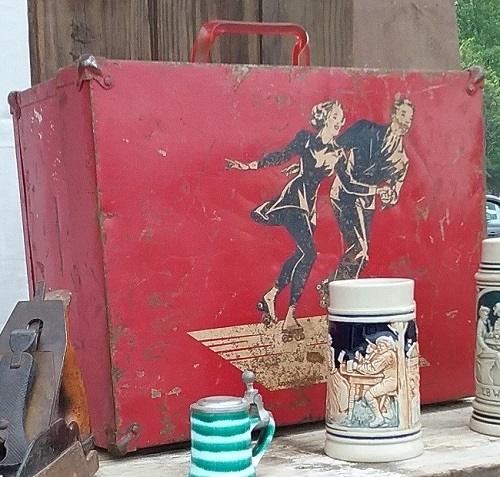 "I really liked this skates case, but I was put off by the condition. What I really loved was that the woman appears to be wearing slacks, though it could be tights." The Vintage Traveler

Liberty, NC - We just returned from a trip to the eastern part of North Carolina, which is a very different world from the western part of the state where we live. Think beaches and tall pines and lots of water and marshes as opposed to mountains and rolling hills with rushing rivers and scenic vistas. In fact, the slogan for NC tourism used to be Variety Vacationland.

On the way home our last stop was the twice a year outdoor old stuff market at Liberty, NC.  I’ve been going to Liberty faithfully since 2005 and I’ve never been disappointed. The show has changed a bit in nature to reflect changing styles in home decorating. More on that in a bit. The show advertises that no new stuff is allowed, but many dealers ignore the unenforced rule. Still, it’s the best I’ve found in the Southeast.

So, here are the things I found interesting but did not buy. First, the hooked Scottie rug above was a great temptation. Probably from the 1930s, he was a great example of that popular little dog, but I already have two Scottie rugs and do not need another.