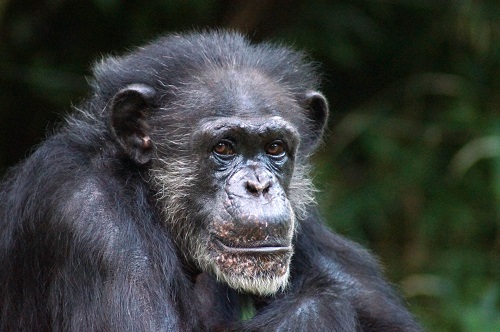 Asheboro, NC – The North Carolina Zoo sadly announces that Maggie, the 46-year-old matriarch of the chimpanzee troop, was humanely euthanized on Friday, April 12, after a period of declining health. She lived a full life for her species—female chimpanzees typically live for approximately 40 years.

Maggie was one of the Zoo’s longest residents. With her passing, all the members of the Zoo’s original chimp troop that opened the habitat in 1980 are now gone. She was the alpha (or dominant) female of the troop for more than 35 years.

In chimp society, alpha females are a stabilizing presence and achieve their high rank through their personalities and the relationships they build within the troop. Maggie often took the role of ‘auntie’ to many of the younger chimps and was the favorite companion of chimp Ham, known as the Astrochimp—the first hominid in space—who retired to the North Carolina Zoo until his death in 1983.

With Maggie’s passing, zookeepers anticipate that chimp Ruby, 22, will become the next alpha female.

Maggie arrived at the Zoo in 1980 from Natural Bridge Zoo In Virginia. Her daughter Bea, born in 1987, now lives at the Sedgwick County Zoo in Wichita, Kansas.

“Maggie’s health had been slowly declining over the past week,” said the Zoo’s Director of Animal Health Dr. Jb Minter.

Dr. Minter further explained: “During a closer examination it was determined she had developed signs of sepsis and severe peritonitis (an infection of the lining of the abdominal wall) from a perforation in her large intestines. Due to her advanced age, the severity of the disease and complications associated with the post-surgical care of this condition, the animal care and veterinary teams made the difficult decision to euthanize Maggie.”

Maggie’s body was presented to the chimpanzee troop so they could observe the death and mourn the loss.

Jennifer Campbell, one of her keepers for 14 years, described Maggie as a strong force in the chimp troop. “She acted like she was too tough to care about the humans who cared for her, but one time she let her guard down and let me play with her toes,” Campbell said.

She added: “Being allowed to tickle her toes until she laughed was one of the highlights of my career here because it made me feel so special. I always admired her bossiness and her unwillingness to take any nonsense from anybody. She was one of a kind.”

“All of us at the North Carolina Zoo are grieving her loss,” said Zoo Director Pat Simmons. “Our dedicated and experienced animal keeper and veterinary teams gave her the best care. Her commanding presence will be sorely missed by our staff and guests.”

Chimps are considered endangered in the wild because of habitat destruction of the forests of central Africa. As a result, their populations have steadily declined over the years. Although numbers are difficult to estimate, the International Union for Conservation of Nature (IUCN) believes there are 172,000 – 299,000 left in the wild. The North Carolina Zoo is actively involved in chimpanzee conservation efforts in Uganda, Africa.

The Zoo is also part of the Association of Zoos and Aquariums Chimpanzee Species Survival Plan which helps monitor and guide chimp populations in zoos and also supports the health and well-being of chimps in the wild.

The Zoo recently lost chimp Ruthie (Ruby’s mother), another of the original members of the chimp troop, back in December 2018 due to heart disease.

On Monday, March 18, 2019, the Zoo welcomed a healthy baby boy to mom Gerre. The Zoo recently announced an online poll the public can participate in to choose his name.