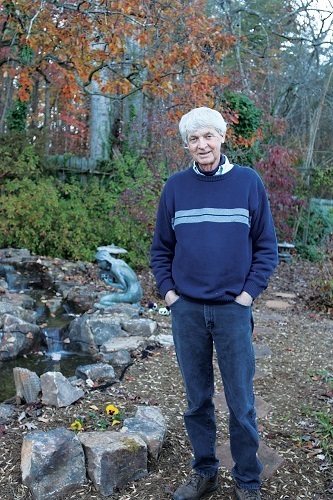 Asheboro, NC - Catch up with New York Times #1 bestselling author Jerry Bledsoe as he talks about how he found his calling as a writer during the turbulent 1960s in the third installment of the 2019 Friends of the Library Sunset Signature Series at 7 p.m. Thursday, May 2, at the historic Sunset Theatre in downtown Asheboro.

Bledsoe's talk is free and the public is invited. The Sunset Signature Series is sponsored by the Heart of North Carolina Visitors Bureau, the City of Asheboro and the Friends of the Library.

Bledsoe will share stories - some hilarious and some poignant - from his new memoir Do-Good Boy: An Unlikely Writer Confronts the '60s and Other Indignities. From his days as an 18-year-old Army enlistee assigned as an unlikely military journalist even though he had flunked high school English to the beginnings of his widely-read column at the Greensboro Daily News, Bledsoe recounts his experiences in the Army, his coverage of the Civil Rights movement in the Triad, his interview with a then-unknown Jimi Hendrix, his encounter with a very angry garden club, and many more adventures.

A Danville native who grew up in Thomasville, Bledsoe worked at newspapers in Kannapolis, Charlotte, and Greensboro, where his regular column became an institution. He was a contributing editor for Esquire and also wrote for Rolling Stone and New York magazines.

His first book was The World's Number One, Flat-Out. All-Time Great Stock Car Racing Book published in 1975. Twenty more books have followed, including compilations of his columns and titles such as You Can't Live on Radishes, From Whalebone to Hothouse: A Journey Along North Carolina's Longest Highway, U.S. 64 and North Carolina Curiosities: Jerry Bledsoe's Outlandish Guide to the Dadblamedest Things to See and Do in North Carolina.

His newspaper series documenting the horrific Klenner-Lynch murders in the mid-1980s became the New York Times #1 bestselling book Bitter Blood, which was followed by other true crime tales including Blood Games, Before He Wakes and Death Sentence. Bledsoe also ventured into fiction, with the nostalgic The Angel Doll in 1996 and its follow-up, A Gift of Angels.

Bitter Blood, Blood Games and The Angel Doll have been made into TV miniseries or movies.

Bledsoe also established Down Home Press, a publishing company, and wrote investigative articles for The Rhinoceros Times in Greensboro.

He and his wife Linda live in Asheboro.

The Sunset Theatre is located at 234 Sunset Avenue. For further information, call the Heart of North Carolina Visitors Bureau at 800-626-2672.