14 Ways to Enjoy the North Carolina Zoo - Plus, extra advice on making the most of your trip 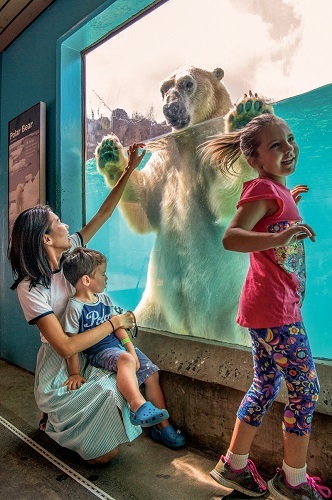 The world’s largest natural habitat zoo is right in the middle of Charlotte and Raleigh in Asheboro, North Carolina — around 90 minutes from both cities. Designed to give animals room to roam in spaces that look and feel like the typical environment where they would live in the wild, the North Carolina Zoo is 2,600 acres consisting of two regions — Africa and North America. A third region, Asia, is expected to open in 2023. Animals on site include polar bears, gorillas, lemurs, giraffes, zebra, rhinoceros, buffalo, elephants, lions, cougars, and many other animals, including numerous bird species.

Plan on spending a few hours in each region or split up your visit over two days. You’ll find more than 5 miles of walking trails, plus a transportation system that makes various tram stops throughout the zoo. Strollers are allowed in the park and are also available for rent.