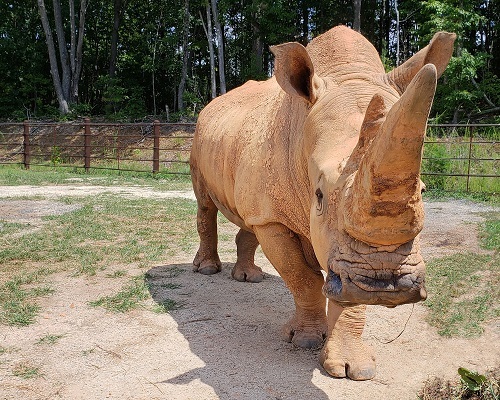 Stanley served as an ambassador for the plight of rhinos in the wild whose populations are threatened | Photo credit: Alexis Rowe, North Carolina Zoo

Asheboro, NC – Stanley, a southern white rhinoceros who has lived at the North Carolina Zoo for more than 30 years and was known for his big, friendly personality, passed away on Friday, Feb. 15, 2019.

Fondly known as “Stan,” the 49-year-old had lived at the North Carolina Zoo since 1987. He was born in 1970 at the Umfolozi Park in South Africa.

Stan started experiencing symptoms of neurological disease including seizure-like activity from a suspected stroke in mid-January, which severely diminished his quality of life at his advanced age. The difficult decision to humanely euthanize Stan was made after the sudden decline in his health this week. A necropsy (animal autopsy) will be performed in an attempt to determine the exact cause of his neurological disease.

Stan arrived at the North Carolina Zoo in Asheboro as a breeding pair with Olivia, another southern white rhinoceros. The rhino herd continued to expand, although no offspring were sired. Stan and his herd thrived on the expansive 40-acre Watani Grasslands habitat. He was often seen digging up mud wallows and napping next to the females. He also loved attention from both keepers and guests alike.

"My fondest memories of Stan are the sunny summer days during a Zoo Snooze or Summer Camp tour. A dozen little camper hands would be giving him rubs while he munched on his favorite treats. The kids loved Stan which further created a love of rhinos around the world,” said Stan’s lead Zookeeper Stacey Weatherly. “Those moments always made my heart smile the most."

Stan was moved from the Watani Grasslands habitat in 2011 due to his age and in order to introduce a new breeding male to the herd. Stan enjoyed his retirement years at the Zoo in a spacious behind-the-scenes yard and climate-controlled barn with his longtime companion Olivia.

He still kept a visible profile as the star of behind-the-scenes tours with his keepers, educating and inspiring guests to help rhino conservation efforts worldwide through his personal Facebook page (Stanley Rhino). Guests got to meet this gentle giant up close, which gave a more personal face to the plight facing rhinos in the wild. Stan has left a lasting impression on his keepers and a legacy of loving memories for the many who visited him over the years.

“When people visit our rhino family, they get the chance to see truly unique animals in one of the largest, most natural habitats for this species in the world,” said Pat Simmons, director of the Zoo. “Having the chance to interact with Stan was truly a special opportunity for our guests, and he was a wonderful ambassador for the Zoo and will not be forgotten.”

“We will truly miss our beloved Stan, yet his legacy will live on through the many people he inspired to care about wild animals around the world,” said Susi H. Hamilton, secretary of the N.C. Dept. of Natural and Cultural Resources.

In addition to their work with the rhinos at the North Carolina Zoo, staff work on conservation projects in several countries in Southern Africa to save this species.  Through SMART (Spatial Monitoring and Reporting Tool) the North Carolina Zoo is working to protect rhinos and other wildlife species in the wild. SMART is an app that allows national parks and other protected areas to better understand patterns of wildlife distribution and illegal activity. This then helps law enforcement combat activities like poaching in a serious and decisive manner.

The second-largest land mammal after elephants, southern white rhinos have two horns, grow to 12-13 feet long and up to six feet from hoof to shoulder, and weigh 4,000 to 5,000 pounds at full maturity.  Stan weighed approximately 4,300 pounds.

The North Carolina Zoo has a breeding herd of four females (Linda, Kit, Natalie, and Abby) and one male (Stormy) with two six-month-old females born in 2018 (Nandi and Bonnie). Olivia remains in her quiet behind-the-scenes yard and enjoys daily interactions with her attentive keepers.

Donations in remembrance of Stan and for rhino conservation around the world can be made by visiting online at N.C. Zoo Society Anti-Poaching Programs.