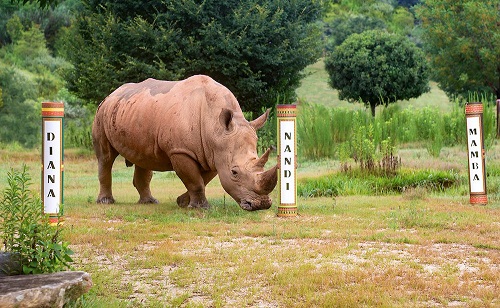 Asheboro, NC – The North Carolina Zoo is excited to announce the name of the female southern white rhino calf born at the Zoo on July 2, 2018. “Nandi” (Nahn-dee) was the first rhino born at the Zoo in 41 years. She was born to mother Linda and father Stormy.

The public was invited to vote on seven names chosen by the Zoo’s rhino zookeepers. Each of the names offered – Nandi, Mamba, Diana, Boadicea, Grace O’Malley, Penelope and Wilhelmina - reflected the theme of strong, female leaders in history, both factual and mythical.

The top three names chosen in the public poll were Nandi, Mamba and Diana. As one last fatherly task, dad Stormy (male rhinos typically play no role in raising offspring) was given the three choices in African inspired custom-made poles spaced several feet apart from each other that were stuffed with Timothy hay – one of his favorite treats. He immediately trotted over to the pole that was named “Nandi.”

Nandi, which means "a woman of high esteem," was the Queen of the Zulus and was born in the 1760s. She died in 1827 in the area now known as South Africa. Nandi was the mother of Shaka, King of the Zulus. Shaka is considered by some as one of the greatest Zulu chiefs and African military leaders. There are accounts that his establishment of all-female regiments was influenced by his warrior-mother.

Eleven days after Nandi was born, the Zoo announced the birth of a second female baby rhino on Friday, July 13 to mom Kit and dad Stormy. The Zoo will offer details about her naming process soon.

At the beginning of the 20th century, southern white rhinos were hunted to near extinction for their horns, which some erroneously believe provide medicinal benefits. Rhino horn is constructed from keratin, which is the same material that makes up human fingernails and hair.  There are currently around 20,000 southern white rhinos left in the wild, mostly in the southern Africa region.

The Zoo’s herd now boasts nine rhinos which consist of Stormy and females Linda, Kit, Natalie and Abby, and the two calves. All seven are on public view at our Watani Grasslands 40-acre habitat. Two older rhinos, Stan (male) and Olivia (female) live in an off-viewing retirement habitat.