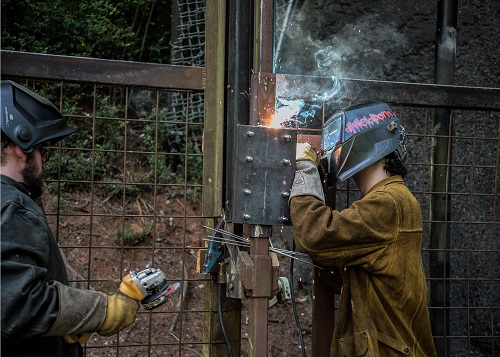 Asheboro, NC – Designing and building a giraffe enrichment device could be a tall order for some, but not for Randolph Community College’s Welding Technology students. They recently worked with zookeepers from the North Carolina Zoo to improve an existing enrichment item and add a new one to the giraffe enclosure behind the scenes at the zoo in Asheboro.

The students and their instructors formed a caravan of vehicles and 4x4 trucks outside the N.C. Zoo Education Building on July 12 to follow Animal Management Supervisor Jodi Wiley through the back gate and along the tram paths to the rear of the giraffe barn to install the new equipment.

The students worked for several hours in the hot, humid July heat to remove an old wire basket from an existing pole and install the new hardware they had fabricated with design help from the zookeepers. While the old basket, originally designed as a hay feeder according to Wiley, could hold a few tree boughs (from which the resident giraffes love to munch on the leaves), the new hardware has a horizontal bar with eight loops across the top to which various enrichment items can be attached. It is also angled to boost the height of the 16-foot pole to a total of 18 feet to place it at “giraffe height.” The hardware was mounted to a hand-cranked hoist that can be moved to the bottom of the pole for access by the zookeepers.

Although the giraffes were safely tucked away in the barn during the “construction,” the RCC students did attract some attention from other animals nearby in the habitat. Suddenly appearing at the habitat gate were an ostrich and three zebras, curious as to what was going on. Although the zebra didn’t stick around, the ostrich supervised the work for quite some time.

After completing the improvement to the first armature, the students enlisted the help of a couple of zoo workers and a forklift. Together, they successfully installed the second fabricated pole at another corner of the giraffe’s behind-the-scenes quarters, then attached the second enrichment armature.

Wiley, who has been with the N.C. Zoo for 15 years, said the enhanced armature would give the zookeepers more options to provide the giraffes “enrichment” with feeding puzzles, toys, and other objects to stimulate their curiosity and engagement.

Wiley, who said the giraffes usually take some time to adjust to new items, reported the Zoo’s big male giraffe went right for the new enrichment when he was let out of the barn.

RCC Welding Department Head Michael S. Ford said real-world projects such as this help the students prepare for the work force, where skilled welders are in demand.

The RCC Welding department previously worked with the N.C. Zoo to build several elephant feeders in 2013 and 2016, which solved a problem of the elephants ingesting sand while feeding off the ground.

The RCC Welding students who worked on the giraffe project include Bailey Black and Cole Jacobs, both of Asheboro; Neil Jones of Coleridge; Spencer Craven and Coy Wolfe, both of Franklinville; Benjamin Salmons of Denton; Laura Thompson of Staley; Alan Mozingo of Trinity; and Seth Williams of Troy. Welding instructor Allan Bechel also assisted.

Randolph Community College’s Welding Technology curriculum, which is housed at the Archdale Center and offers diploma and certificate options, provides students with a sound understanding of the science, technology, and applications essential for successful employment in the welding and metalworking industry. Instruction includes consumable and non-consumable electrode welding and cutting processes. Courses may include math, print reading, metallurgy, welding inspection, and destructive and nondestructive testing providing the student with industry-standard skills developed through classroom training and practical application. Graduates of the Welding Technology curriculum may be employed as entry-level technicians in welding and metalworking industries. Career opportunities also exist in construction, manufacturing, fabrication, sales, quality control, supervision, and welding-related self-employment.