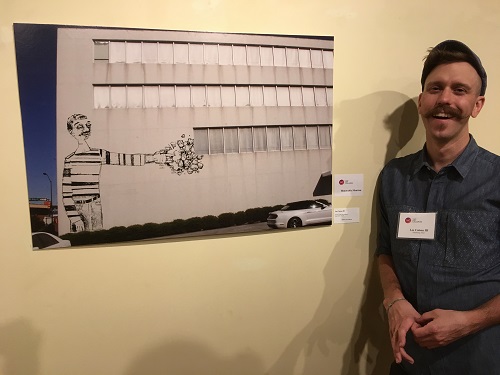 Asheboro, NC - The fifth and final selected visual artist begins his creative journey as part of the Four Saints Brewing Company’s Art Wall Project.  The inaugural visual art installation project provides five regional artists each the resources to produce a three-month art installation across a 12-foot interior taproom wall located at 218 South Fayetteville Street in downtown Asheboro.  The mission of the Art Wall Project is to foster artful discourse among the local community.  Asheboro-based visual artist, Les Caison III is the featured artist from July through October 2017.  Les also serves as the facilitator and inspiration behind the nearly two year spanning Art Wall Project.  Les will create his mixed media artwork onsite during the month of July.  A public work session in the F.S.B.C. taproom is scheduled for Friday, July 21 from 3 p.m. to 6 p.m. The public is invited to stop by during this free event, meet the artist, and become more familiar with Les’ mixed media artistic process.

Les Caison’s complete art installation will be on exhibit at the F.S.B.C. taproom August 1 through October 31, 2017.  A free, public meet-and-greet event is scheduled for Friday, October 6 from 5:30 p.m. – 7 p.m..  To see more of Les’ artwork visit his website: www.LesIII.com.    For more information on the Four Saints Art Wall Project visit: http://www.foursaintsbrewing.com/four-saints-art-wall-project.html .

About the Artist:  Les Caison III is an award winning North Carolina native visual artist.  He exhibits his artwork throughout his home state, the southeastern United States, and amid venues a bit further away.  He has participated in 130 exhibitions including 35 solo shows.  His art making practice includes a mixed media approach that intertwines layers of drawing and painting.  Les recently earned an Honorable Mention for one of three works currently on display at the Theatre Art Galleries in High Point, NC as part of the Urban Expressions Exhibition, June 1 - August 4, 2017.  Les’ art is also included in California’s Sweet N Low Exhibition hosted by the Bedford Gallery in Walnut Creek, June 22 - August 27, 2017.  See more of his creative process via his Instagram account: @LesThreee .

“I make stuff as I wander.  Sometimes the artist’s responsibility is to offer a visual story for others to consider.  It’s the viewer’s choice to connect and participate in these stories.  Sometimes there are no words to describe the emotion that is being portrayed with colors and lines – or perhaps there are too many words to describe what is being felt.  It is my goal to create those kinds of images for others to consider – the ones where one image is worth 1,000 words and where a sincere resonance within the heart is created.”  - Les Caison III

About the project:  The inaugural Art Wall Project selected five visual artists to create separate compelling works of art on-site utilizing a designated 12 feet long and 4.5 feet high blank wall in the Four Saints Tasting Room.  Each of the five works of art are on display for a period of three months. The complete Art Wall Project, with rotating art installations began March 2016 and concludes October 2017.  Each artist will be honored with a public meet-and-greet reception.  A goal of the project is to offer insight and foster dialogue between the local community and the regional visual artists.  As an added bonus, each artist’s designs are featured on limited edition merchandise to commemorate their project.  These items will be available for sale to the public.  For more information on the Four Saints Art Wall Project visit: http://www.foursaintsbrewing.com/four-saints-art-wall-project.html .