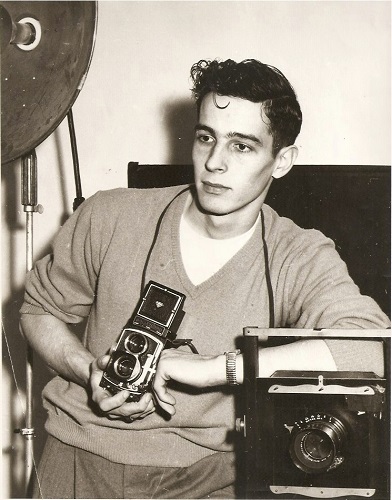 The Hudson Family Photography Exhibition will be on display until Tuesday, February 23rd and the exhibition is free and open to the public.

Asheboro, NC - The Randolph Arts Guild is set to open an exhibition that will highlight the work of a local family of photographers.  The exhibition will take a retrospective look at the work of the late James (Jim) Hudson and will include photographs by his surviving wife and son, Joanna Frazier Hudson and Abe Hudson.  The Hudson Family exhibition will be on display in the Randolph Arts Guild’s Sara Smith Self Gallery during the month of February.  An opening reception is set for Tuesday, February 2nd from 5:30pm - 7:30pm. The Randolph Arts Guild’s Sara Smith Self Gallery is located at 123 Sunset Avenue in downtown Asheboro. The event is free and open to the public. The exhibition will be on display until Tuesday, February 23rd and will close with a Lunch and Learn at Noon on the 23rd.

James Harris Hudson (1931-2015) was born in Franklinville, NC. From a young age he gravitated towards photography, taking photographs with a camera given to him by his aunt. He enlisted in the United States Air Force and served in the Korean War as a photographer aboard B-29 reconnaissance planes. For a time Jim was later stationed in Okinawa, Japan where he set up a studio and lab on base.  There he spent a great deal of time photographing the rural areas. Upon his return to the US he began working in Olathe, Kansas at a leading portrait photography studio. He would later come back to North Carolina and establish Hudson Studios with his brothers, Chic and Phil, near the corner of Kivett and Fayetteville Streets.

As the business grew they needed more space. They built a large studio encompassing labs and set space in High Point, NC where they began to specialize in commercial furniture photography.

After more than 25 years the studio was sold and Jim continued work as a freelance photographer. Throughout his professional career he spent much of his free-time going out on "photo expeditions" around the state.

Joanna Frazier Hudson was born in High Point, NC in 1943. She studied drawing, photography and film at Virginia Commonwealth University and from there received a Bachelor of Fine Arts Degree.

After graduation she continued work as art director for Hudson Studios specializing in furniture photography and catalog printing. Work in the field supplemented her creative projects until attending a graduate school at the University of NC at Greensboro where she received a Masters Degree in Fine Art. Her studies were primarily painting, photography and film.

She went on to teach film courses as art in the broadcast/cinema division of UNC at Greensboro and later other film subjects at Wake Forest University in Winston-Salem, NC. In addition to her long-term work at UNCG, she traveled to other universities as a guest lecturer, conducting workshops and seminars. Throughout her teaching career, Hudson stayed active doing her own work, showing independent films, documentaries and photography at prominent local galleries.

Abe Hudson was born in Winston-Salem, NC in 1979. After graduating from Asheboro High School in 1998 he enlisted in the United States Marine Corps. There he served as a combat correspondent documenting the stories of Marines across the United States and overseas in words and pictures. After his service he enrolled at Randolph Community College studying commercial photographer under Chuck Egerton. He has since shot commercially for furniture photography studios, portrait work and as a hobby.

Jim’s sincere love of photography was contagious.  Through their photographic outings across the state you can see his passion for the art transferred to Joanna and Abe who now carry on the tradition.

The Hudson Family Photography Exhibition will be on display until Tuesday, February 23rd and the exhibition is free and open to the public. The Randolph Arts Guild is open Monday - Friday 10am - 5pm and Saturday from 10am - 2pm.  For more information please call 336-629-0399.

The Randolph Arts Guild is “Your window to the arts in Randolph County” providing classes, workshops, exhibitions and much, much, more.  For more information please call 336-629-0399, or email [email protected]