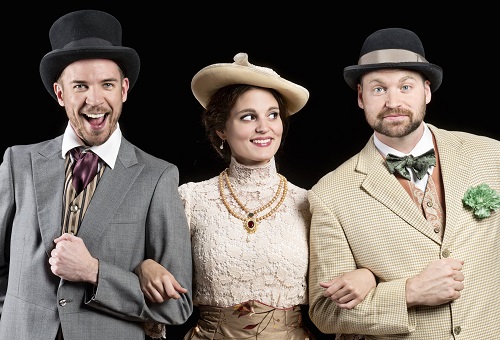 From left: Tim Sailer as Jack, Zoe Speas as Gwendolen, and Josh Innerst as Algernon in THE IMPORTANCE OF BEING EARNEST. Photo by Michael Bailey

Asheboro, NC - The American Shakespeare Company (ASC) begin their 2016 North American Tour with a January with a stop in Asheboro.  During the Virginia-based touring company's visit they will offer two performances and additional workshops for the public. The City of Asheboro Cultural and Recreational Resources hosts two performances: William Shakespeare's "Julius Caesar" on Friday January 15th at 7:30 p.m.; and Oscar Wilde's "The Importance Of Being Earnest" on Saturday, January 16th at 7:30 p.m.  For more information on theater tickets visit www.sunsettheatre.org call (336) 626-1240.

Additional programming to complement the performances include two workshops: "Character Play: Vocal Performance" on Saturday, January 16th from 10 a.m. to 11 a.m.; and "Staging High Comedy" also on Saturday, January 16th from 11:30 .m. to 12:30 p.m.  Each class is $5.00.  These classes are designed for people ages high school through adult with any level of interest in acting.  For more information on the classes and to register visit the Randolph Arts Guild's website: www.randolphartsguild.com and look under classes or call (336) 629 -- 0399.  Limited space available.

All performances and classes take place at the Sunset Theatre located in downtown Asheboro at 234 Sunset Avenue.

The practice of casting a single actor in multiple roles, a staging condition engaged by Shakespeare’s company and the ASC, opens opportunities for physical and mental exploration.  Our actors will teach students basic differences between the front and back vowels which leads to the connection and understanding of vocal placement (i.e. breath support, vocal range).  Then collectively we will pull from Shakespeare’s text and create a multitude of vocal character experience levels are welcomed.  Great for Drama students and those who are just plain curious.

STAGING HIGH COMEDY —The Importance of Being Earnest

In this workshop, participants will explore theories and methods for addressing high comedy.  By playing games and introducing some basic movement vocabulary and techniques, the education artists will introduce some rules that govern the creation of a play or creation of a troupe culture in the plays of Oscar Wilde.  This workshop will speak to familiar areas for theatre students and push Literature students to take a broader look at the relationship physicality plays in the development of a production.