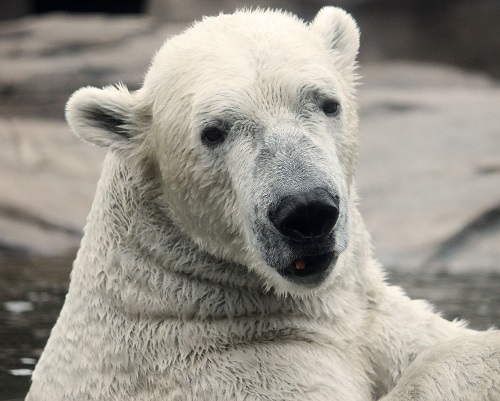 ASHEBORO, NC – The North Carolina Zoo is proud to announce that Anana, its 15-year-old female polar bear, will welcome a new companion this winter.

Nikita, an 8-year-old male polar bear at the Kansas City (Mo.) Zoo, is relocating to Asheboro in the coming months to be paired with Anana. Nikita’s move comes at the recommendation of the Association of Zoos and Aquariums’ (AZA) Species Survival Plan Program, which manages specific, and typically threatened or endangered, species population.

“This is exciting news for the hundreds of thousands of folks who visit our wonderful zoo each year,” said Gov. Pat McCrory, who attended the ribbon cutting of the expanded polar bear exhibit last October. “We should be honored and proud that AZA thinks so highly of our zoo and its staff.”

Less than 20 percent of AZA-accredited zoos have polar bears and only 60 polar bears are on exhibit in the United States. This means that all polar bears in zoos are genetically important for the species.

“Our recently expanded polar bear habitat was designed to maximize the chance of breeding polar bears,” said Dr. David Jones, director of the North Carolina Zoo. “The exhibit has a special den for a mother with cubs, which makes our situation ideal for this purpose.”

Anana, whose name means "beautiful" in Inuit, was born at the Seneca Park Zoo (Rochester, N.Y.) in November 1999. She arrived at the Lincoln Park Zoo in 2001 and was moved last September to Asheboro, where she’ll remain until construction on the Lincoln Park Zoo's polar bear exhibit is completed.

Nikita was born at the Toledo Zoo. He arrived in Kansas City in 2010 when he was 3 years old.