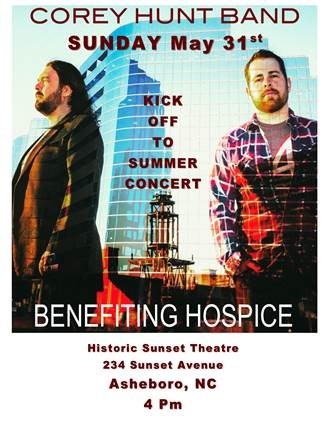 Asheboro, NC On This Sunday afternoon, May 31, 2015 at 4:00pm, Corey Hunt, along with his band will take the stage at the historic Sunset Theatre in Asheboro.  Their hopes are to fill each of the nearly 300 seats.  Their motivation is far greater than mere entertainment.

In October of 2010, Corey lost his Grandmother after a three year battle with ovarian cancer.  During her last few months and weeks, Hospice of Randolph County provided an unparalleled service.  Their compassion allowed dignity, and while providing knowledge and comfort, they prepared Corey’s family with the coping mechanisms needed to accept the transition.  In his Grandmother’s final hours, the Hospice nurse even shared in their tears.

After finding success in the wake of such a tremendous loss, Corey promised to provide continuous support to hospice in the best way he knew how.  This live music event will mark the 4th benefit Corey has hosted for this organization. Corey encourages you to join him in supporting Hospice of Randolph County through this special concert.

All the proceeds will go directly to Hospice of Randolph County.  Tickets are $10 each and can be purchased in advance at Hospice of Randolph County, located at 416 Vision Drive in Asheboro, NC and a limited number of tickets will be available at the door the day of the event. The concert will begin at 4:00pm and there will be “general seating.” Corey Hunt is managed by Red Dirt Promotions, and has performed all across North Carolina as well as Nashville, Tennessee, Oklahoma, Texas, Virginia, Georgia, and Alabama, just to name a few.  For additional information, you may contact Hospice of Randolph County at (336)672-9300 or online at www.HospiceofRandolph.org