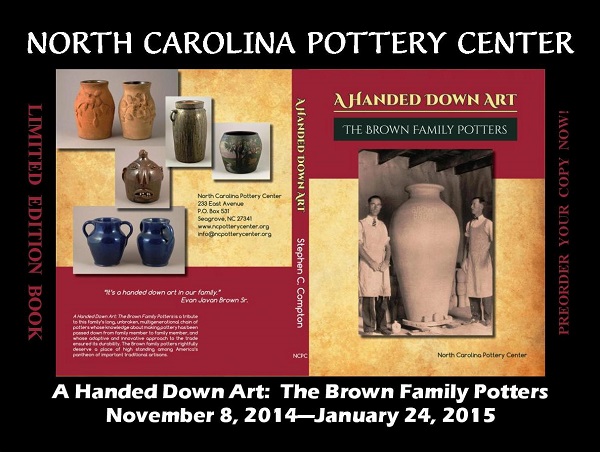 Seagrove, NC - One of the South’s most significant pottery-making families will be celebrated in a North Carolina Pottery Center exhibit called A Handed Down Art: The Brown Family Potters beginning with an opening reception on November 8th.

According to exhibit curator Stephen C. Compton, “A Handed Down Art: The Brown Family Potters is a tribute to this family’s long, unbroken, multigenerational chain of potters whose knowledge about making pottery has been passed down from family member to family member for about two centuries, and whose adaptive and innovative approach to the trade ensured its durability.”

After many years working as potters in nearly every Southern state, brothers Davis and Javan Brown opened their own Brown Brothers’ Pottery in Arden, N.C., near Asheville, in 1925. Nearly a century later, Charles Brown keeps the family tradition going in his Brown’s Pottery shop where his grandfather Davis Brown, and his father, Louis Brown, last turned wares. Nearby, Javan Brown’s granddaughter, Cherry Brown Corn, keeps her wheel turning after many years working side-by-side with her parents, Evan and Mercedes Brown, at Evan’s Pottery. Following many years as a military and commercial airline pilot, James E. Brown Jr., another Davis Brown grandson, recently opened his own Brown’s Pottery shop near Hiddenite, N.C. In Alabama, Jerry Brown runs a traditional pottery shop where clay is ground up in a mule-powered pug mill.

Nearly two hundred objects gleaned from family and private collections will be displayed in the exhibit representing the work of numerous Brown family members. Examples include utilitarian, decorative art, and dinner wares. The Browns are well known for their face jugs, including one folk art masterpiece in the Philadelphia Museum of Art, and many of these whimsical objects will be featured in the exhibit.

A numbered, limited edition, 154 page exhibit catalog will be available that includes many historic images never before published and color photographs of all displayed items. A limited edition of specially marked and numbered face jugs made by Charles “Charlie” Brown specifically for A Handed Down Art: The Brown Family Potters will be available for purchase.

Exhibitions are made possible through the generosity of our membership, the Mary and Elliott Wood Foundation, The John W. and Anna H. Hanes Foundation, and the Goodnight Educational Foundation. This project was supported by the N.C. Arts Council, a division of the Department of Cultural Resources, with funding from the National Endowment for the Arts. Thank you!

The mission of the North Carolina Pottery Center is to promote public awareness of and appreciation for the history, heritage, and ongoing tradition of pottery making in North Carolina. The Center is located at 233 East Avenue in Seagrove, NC. Hours of operation are Tue - Sat 10 am - 4 pm. For more information, please call 336.873.8430, visit ncpotterycenter.org, or find us on Facebook.