The Soviet Union’s contribution in World War II, and its influence on war crimes trials that followed will be the topic of the talk held by Dr. Thomas Earl Porter of N.C. A & T University. Porter, professor of Russian and Modern European History, and author of several books and more than 50 articles will discuss the fate of Soviet POWs in Nazi Germany, as well as the legal groundwork and evidence collection undertaken by the Soviets for the Nuremberg war crimes trials. He will also touch on Soviet efforts to minimize the assault on Russian Jewry by the Germans, and share some little-known aspects of the ensuing cold war between the US and the USSR. 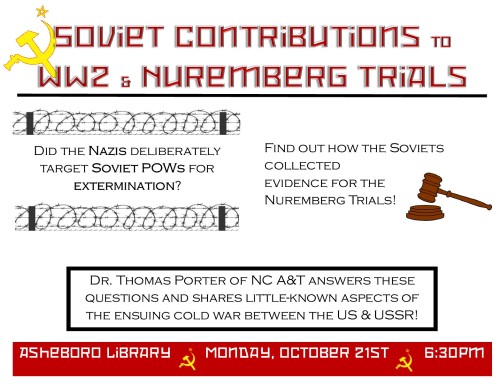